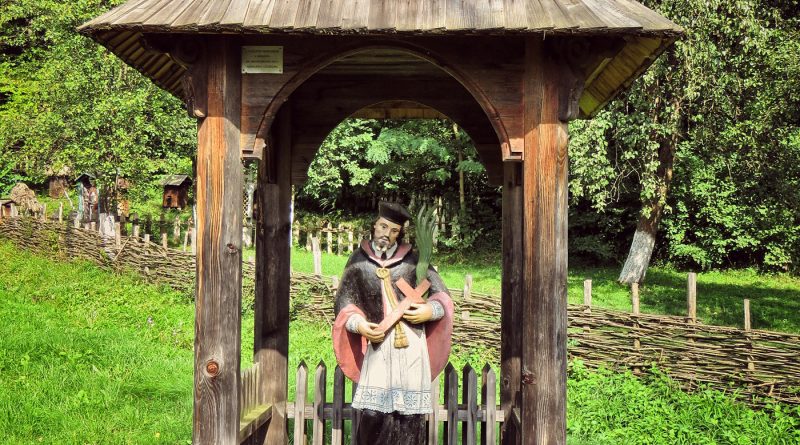 They are everywhere in Poland – in towns and in the countryside, by the main thoroughfares and off the beaten track, on top of hills and by streams, rivers and ponds – roadside shrines (also known as wayside shrines) stand as silent witnesses from the forgotten world.  They are the testament to over a thousand-years of history of the nation and Christianity, which in Poland are inseparable. You can you learn a lot from them about the area and the people who lived there if you know how to read them.

The oldest surviving shrines come from 18th century, but they existed in the Middle Ages in Poland. There were funded by wealthy land owners, whole communities and individuals to commemorate important events, express gratitude, ask for reversing of misfortune, beg for mercy or to ask for a good harvest or protection from flood, fire or other calamities. They were also geographical landmarks and marked the boundaries of villages.

Roadside shrines come in all shapes and sizes from simple wooden crosses, figures of Christ, Virgin Mary or saints to quite elaborate small chapels – hence the name przydrożne kapliczki. The word (adjective) przydrożny comes from two words: przy at, by and droga road, way combined into przy drodze by the side of the road. The word kaplica, similarly to the English word chapel, comes from Latin word cappa cloak which later evolved into cappella and eventually into chapel. In Christian tradition, it refers to the cloak of St Martin (you can find out more about it here https://www.ewtn.com/library/mary/martin.htm and here https://en.wikipedia.org/wiki/Martin_of_Tours

Kapliczka is a diminutive form from kaplica meaning little chapel

Krzyże crosses, figurki statues and kapliczki shrines were often placed on the edge of villages, near rivers and ponds and at crossroads traditionally regarded as places inhabited by evil. Many villages and small hamlets did not have their own churches and therefore a roadside shrine was the only accessible place of worship. Traditionally, all funeral processions on the way to a cemetery stopped at the shrine to say the last farewell. If a village was on the pilgrim route, pilgrims were welcome at the shrines. During the wars and uprisings, money and family heirlooms were hidden somewhere around the shrine to protect them. Some of the shrines were funded by highwaymen as act of penitence for committed robberies, although it did not stop them from hiding the stolen treasures under the shrine. In more recent times, during World War II, the area around shrines became burial grounds for Polish soldiers or resistance fighters killed in battles or executed by German Nazis. During the Cold War, some shrines were also used as a covert contact points for spies. Over the centuries, they have been witnesses to prayers said and vows made.

The vast majority of the shrines were designed and built by local craftsmen but some have been designed by famous artists. For example, in Krynica Zdrój, one of the most famous Polish spa towns, on the slope of Góra Parkowa there is a forest shrine to Our Lady Queen of Krynica Springs designed by one of the greatest Polish painters –  Artur Grottger.

and listen to the radio program about him here http://www.polskieradio.pl/39/156/Artykul/1556335,Artur-Grottger-romantyk-pedzla

Every shrine has its rich history and legends. In Poland, which witnessed so much destruction of its heritage, the shrines are often the oldest objects in the area and the only link with our ancestors.

For example, a small chapel in Leżajsk commemorates the death of Maria Szczepanikowa in 1624, who was accused of being a witch and burnt at stake. Other documents indicate however that her death had less to do with black magic and more to do with her large inheritance.

The figures placed inside the shrines had a particular importance for the local communities. For example, a statue of Święty Józef Saint Joseph was often placed within farm yards to symbolise a good father and protector of the family. Św. Antoni St Anthony was usually placed on top of hills to look out for items lost by locals.  Św. Mikołaj St Nicholas was located on the edge of forests to protect from wolves. Marian figures (relating to the Virgin Mary) are often placed near fields and meadows, but you can also see them within walls and in gardens of individual dwellings for private devotion.

Probably the most common saint placed in shrines in Poland is Święty Jan Napomucen St John of Napomuk. Shown in the robes of a priest holding a crucifix or a palm symbolizing martyrdom often has his index finger placed on his lips in a gesture of silence. He was sentenced to death by king Wenceslaus IV of Bohemia for not revealing the secrets of confession (Seal of the Confessional). He was thrown off the Charles Bridge into the river in Prague. His shrine indicates there is a water course nearby and he is believed to protect from floods and drowning. 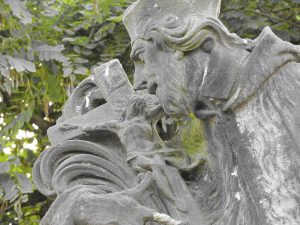 A lot of shrines have either a crucifix or a figure of Christ, and among these the most common is Chrystus Frasobliwy Christ Sorrowful. It became so popular that you can you can buy small replicas carved by local artists.

The motif of the roadside shrines features prominently in Polish literature and art.

The most famous reference to roadside shrine is in the poem by Adam Mickiewicz “Powrót Taty” Return of Dad. It tells the story of young children praying at the local shrine on the hill for their Dad’s safe return home. It is that act of praying that saves their father from robbery and violence of the highwayman who observes the children from his hideaway. It reminds him of his own wife and children and he lets the father and children go free without any harm.   You can listen to the poem being read here: https://www.youtube.com/watch?v=QLIqzICAK9o  and see the text here

Research further the history of roadside shrines in Poland.

Find out why many shrines were built near trees.

Look at some examples of paintings such as the ones below:- 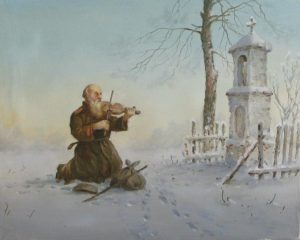 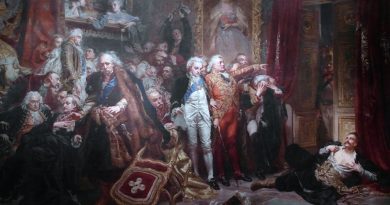 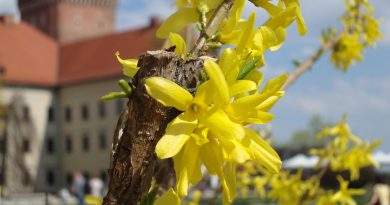 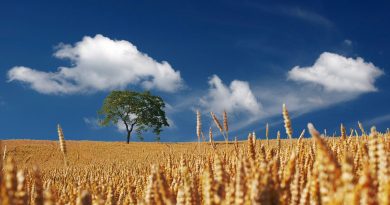